Absolution is the final book in the series, "Absolution", a trilogy of young adult fantasy stories set in a magical land called Nusantara. The events unfolding in this book occur five years after the conclusion of the first book Amok.

"Absolution is both a quest for absolution and a journey of faith as Sultan Mikal attempts to restore Kudus’ blessing on the kingdom of Terang and preserve their magical gifts." (Anna Tan) An Excerpt from CHAPTER 5

Story note:
Tulen is living as a servant in the Impian Palace. In the earlier part of Chapter 5, Tulen is talking to Magda, the head cook & Tengku Nawal’s nanny, in the kitchen when they hear Tengku Nawal throwing a tantrum. They go up to her room to find out what’s going on.

What Tengku Nawal wants, of course, is something we can’t do anything about.

“I don’t want to get married!” she shrieks as we step into the room.

Tengku Nawal flings her arms around Magda’s waist and buries her face in her chest.
“Magda, oh Magda, Ayahanda is a horrible person. He’s forcing me to get married to some fat old foreign raja!”

Magda flounders. Che Nuri groans from the sofa, her face buried in her hands.

Yes, because you’re annoying. I keep my head down and stare at the floor to prevent myself from rolling my eyes.

“It’s only the Sultan of Maha,” Che Nuri grumbles through her hands, “the actual twenty-year-old ruler of this Sultanate.”

My head shoots up so fast my neck hurts. “That’s not a foreign raja.”

“Who asked you, girl?” Tengku Nawal snaps. “You wouldn’t understand!”

I clap a hand over my mouth and stare down at the floor again, my cheeks heating up.

I can hear rare impatience leaking out from Magda’s thoughts—leftover irritation from our earlier conversation?—before she deliberately pushes it away. She runs a soothing hand down Tengku Nawal’s back.

“Come, sayang, talk to Magda. What did your father say?”

“He sent me a letter,” she wails, passing Magda a crumpled piece of paper. “He didn’t even bother to come and talk to me himself. He sent Nuri here with a letter.”

Her thoughts radiate with hurt and betrayal, and her eyes start to tear up again. By now, I know what’s coming, so I slip out of the room. There’s fresh bawling before I’m even halfway down the corridor.

In the kitchen, I spy an earlier batch of pastries cooling on the table. Didn’t Magda once say that pastries calmed Tengku Nawal? I try to remember when I heard that, but realise she hadn’t actually said it. Should I get pastries to calm the brat down?—I’d read it off her thoughts when I was following her in the market.

I stretch out my Gift towards Tengku Nawal’s room. I can’t catch any single thought from where I am—it’s all a tangled mess of whispers—but the fragments I catch seem calmer, less roiling. I put a few puffs on a tray along with a glass and the pitcher of water I came to get and head back into the tiger’s lair.

Today is the last day of Book Launch Week Sales.
Hurry! get your copy of Absolution before prices increase tomorrow.

Get Absolution now
| Amazon | | Other retailers |

Or get all three books
| Complete Series |

Get the other books in the series at our Launch Week Sales price of USD2.99!
| Amok | | The Tale of the Hostage Prince |

Looking for paperbacks?
Paperbacks are in the process of getting printed. You can pre-order a paperback directly from Teaspoon Publishing if you're based in Malaysia!

Living elsewhere?
Ask for Absolution from your nearest independent bookstore! 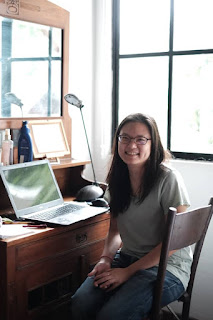 ABOUT THE AUTHOR
Anna Tan grew up in Malaysia, the country that is not Singapore. She is interested in Malay/Nusantara and Chinese legends and folklore in exploring the intersection of language, culture, and faith.
Anna has an MA in Creative Writing: The Novel under a Chevening scholarship and is the President of the Malaysian Writers Society. She can be found tweeting as @natzers and forgetting to update annatsp.com.

You can find Anna on:

Email ThisBlogThis!Share to TwitterShare to FacebookShare to Pinterest
Labels: Book

I came across a lively waterfall,
as I walked one morning in the park.
Its rocky cliff face imposing and tall,
adorned by shrubs and trees with thorny bark.

Restless waters noisy and excited,
Hastily running towards the rocky edge.
Leaping, jumping, looking much delighted,
Prancing, dancing, like actors on a stage.

Rushing, gushing, one another pushing,
stumbling, tumbling, rumbling through the air.
Dropping, diving, frantically screaming,
falling swiftly into a pool down there.

These waters live a short and care-free life,
they're born to fall, it's how the waters thrive.

I hope to grow up big and strong,
the budding green shoot says,
With sturdy branches all year long
and green leaves every day.

Like those tall trees standing by,
towering over me,
Reaching high up to the sky,
for everyone to see.

An immense tree I hope to be
tho' now I'm just a shoot,
Tiny buds is all you see
I'm no taller than a foot.

There is a long long way to go,
to turn from shoot to tree.
Nonetheless I hope to grow
A huge tree I shall be.

(I took this photo of a young budding shoot of an agave plant on Tue 21Jun22 in Westlake Garden.)

(This painting was created by my three-year old grand-daughter's palm prints. It brings to mind every parent's hope for a child's future.)

Of many colours, hues, and shades,
a child's future is made,
in it our hope is found.

Warm tints of happiness may fill its days,
cold shades of sadness may come its way,
yet will our hope abound.

In bright red times of joy and cheer,
when fresh green chuckles and laughter we hear,
great heights our hope attains.

In dark blue times of worry and care,
when heavy deep purple burdens we bear,
unchanged our hope remains.

Tho' months be darkened by war and strife
or years be shadowed by sufferings in life
our hope will still prevail.

Whatever the colour, strong, or mild,
be it pretty and sweet, or ugly and wild,
our hope will never fail.

"Look at me! Look at me!",
says the happy banana tree
Playfully waving outstretched arms
for everyone to see

It wants to stop me in my way
saying, "Let's try peek-a-boo"
A happy little child at play
it wants me to join in too.

This happy little banana tree
does not grow very tall
It is all green and leafy,
and has no wood at all.

Their long and slender tree trunks
bear the scars of many years
Wearing crowns of slender palm fronds
saying, "Pleased to see you here"

All through the day these coconut trees
stand tall to greet their guests
Gently waving branches
saying, "Come and take a rest".

Absolution is the final book in the series, " Absolution ", a trilogy of young adult fantasy stories set in a magical lan...